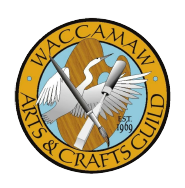 The Waccamaw Arts and Crafts Guild was established in February, 1969, when landscape artist and gallery owner Larry Boulier and others met at the Horry Tech Center and founded the organization with thirty-two charter members. John Woodruff gave the association its name. Myrtle Beach art history was made!

The Purpose of the Guild was “to correct a cultural deficiency in the fine arts in Horry County,” and membership was open to all who loved the arts, not just artists and craftsmen.

The WACG was tasked to provide support and encouragement to local artists by offering meetings, workshops, and shows. The group also intended to provide further training for art students and had a long term goal of building an arts center for the county.

Almost immediately after its establishment, the Guild sponsored its first ever Spring Exhibition, in April, 1969. Held at Horry Tech, the show was open to all artists and craftspeople living within fifty miles. There was no entry fee and entrants did not have to be Guild members. There was no formal judging; awards were based solely on popular vote. Nearly 1500 people attended the two day event which showcased 350 artists, of whom 120 were craftsmen.

This was followed up by a successful outdoor show at the Myrtle Beach Convention Center during the Sun Fun Festival in June, 1969. Four months later, the WACG sponsored its first Fall show, an “Arts and Crafts Christmas Bazaar,” at the Public Service Authority. It featured works by noted local professional artists; such as, Pete Przekop, Jimmy Garrison, Larry Boulier, Elizabeth Roberts, Alex Powers, and Martha Thomas. Amateur artists and sculptors also participated.

Thus was established a pattern of shows that would continue until the present. The Spring Show became the prestigious Juried Show at the Burroughs and Chapin Art Museum; an outdoor exhibit became six annual Art in the Park events; and the Fall Show became the Member’s Judged Show, held at a variety of locations.

A purchase award was established for prize winning artwork. These pieces became the nucleus of a collection of noted local artwork now held by the Museum and periodically displayed. The purchase awards were underwritten by a number of civic minded businesses.

Throughout the years, the Guild has offered free monthly programs to the public and continues to do so today. Many well-known artists have presented at these meetings; including Alex Powers, Dixie Dugan, Jim Arendt, Kate Lagaly, Leo Twiggs, and Bob Graham. Workshops on a variety of media have also been offered. The Guild has sponsored art shows for young people, brought SC Art Commission Trucks to local schools, and offers scholarships to high school students.

The organization briefly had a “bricks and mortar” presence in Horry County with a coop gallery in Myrtle Square Mall, numerous members have opened and run private galleries. Show and Communications Directors – Phyllis Dunn, Jackie Stacharowski and Tom Britton, most recently, – have found a variety of venues for WACG shows. Art in the Park, coordinated by Joanne Utterback, has long been held at Chapin Park and now offers two weekend events at Valor Park in Market Common as well.

The long held goal of creating a center for art in Horry County finally came to fruition when the WACG President, Gaye Fisher, was instrumental in acquiring a large beach house, Springmaid Villa, in 1984. With great effort the 150 ton house was moved to its present location in south Myrtle Beach, and with even more effort, became the Burroughs and Chapin Art Museum. The guild continues its association with the museum through its monthly meeting and Juried Show, which are held there.

The Waccamaw Arts and Crafts Guild, the oldest guild in the area, continues to serve the arts community as it moves through the twenty first century.

This organization is funded in part by the South Carolina Commission which receives support from the National Endowment for the Arts.